Having now acted as architect and principal designer on six stores for the confectionery brand, the latest 1480 sq. ft outlet opened its doors at the newly constructed retail development earlier this month.

James Whipp, Architectural Technician at MWA, comments: “Being reappointed by HARIBO is a testament to the MWA team’s capability in delivering functional space that is fit for the retail landscape of today.

“The expectations of consumers have changed and the concept of filling up stores with different products is just simply not enough. Retail should be about the experience and this is exactly what HARIBO creates for its customers.

“With HARIBO’s trust to deliver the brief on time and to budget, the new store at the McArthurGlen Designer Outlet West Midlands has been designed as a purposeful but fun space which features all the essential elements that bring the ‘Happy World of HARIBO’ to life.”

Rebecca Fox, Retail Manager at HARIBO, comments: “At HARIBO we deliver a truly unique retail experience and the team at MWA has once again proven that they can bring this concept to life.

“We are excited to be providing everyone who visits with memorable moments of childlike happiness. That’s what shopping for your favourite HARIBO sweet should be all about!” 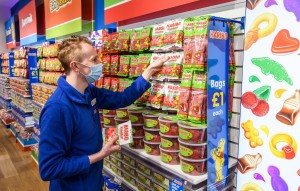 After completing the design works of HARIBO’s first store at London Designer Outlet, MWA was appointed on subsequent stores at the McArthurGlen Designer Outlets in York, Cheshire Oaks and Ashford, and the Clarks Village Outlet in Somerset.

The high-quality shop-fit works were completed by SIM Shopfitting who have been involved on all the previous stores.

“At HARIBO we deliver a truly unique retail experience and the team at MWA has once again proven that they can bring this concept to life.